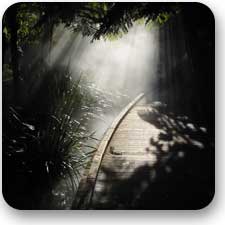 Rules of Travel - MFRPG takes a much overlooked area of roleplay and turns it into an adventure all its own. With our rules of travel you must navigate your way across the open spaces and dense terrain using your wits and skills.

Leading a Party in Travel - When a group of characters is moving as a group it is the leader that chooses the direction of travel and has a chance of getting lost.

Landmarks - Landmarks are used to gain your bearings and help prevent you from getting lost. Following an Perfect landmark prevents any possibility of becoming lost. A perfect landmark is any object that you can see that is unobstructed and within 300 feet of the character. Examples of Perfect landmarks are clearly marked roads, trails, well marked paths, streams or shorelines. Magical maps create a perfectly marked trail to your destination making it impossible to get lost as long as you possess the map and are within its maximum range. As long as you have a Perfect landmark in sight and there is an open path to that landmark it is impossible to get lost. If not then the possibility of losing your way becomes a real and present danger. If a character has traveled a particular path enough times before then every tree and rock becomes a Perfect landmark.

Getting Lost - If there are no landmarks to follow or they are unable to see those landmarks then the character is automatically lost. There are many ways to get lost while traveling even if you have a landmark to follow. One example is when there is poor visibility making it hard or impossible to see a landmark. Another would be if a character were teleported into a new place or fell into a hole and found themselves in a new place. There are also magical spells that can disorient a traveler.

Calculating Characters Chance to Navigate by Landmark - (Per Hour)

Quality of Landmark minus percentage of obscuring object.

Effects of Getting Lost - If a party becomes lost the GM must randomly roll an 8 sider indicating the parties direction of travel. The party is not informed whether they are lost at this time. The characters’ movement continues to be random until they locate a landmark that they can see, or a landmark that is not on the normal path at which point they roll an awareness check to realize they are lost.

Recognizing that the Party is Lost - When the party recognizes that they are lost then they must try to locate a familiar landmark to get back on course. If they cannot find one then they must attempt to plot a new course.

Plot a New Course - A lost party that cannot find a landmark can attempt to plot a new course based on direction. Determining the correct direction of travel can be done through the sun, moss on the trees, or other methods. This requires an awareness check. If a character fails this check, the GM chooses a random direction and dose not alert the players. The characters are once again lost. Certain higher level classes have spells that can determine whether a path is correct and even get the party back on the proper trail, a very handy skill especially where trying to navigate in extreme terrain such as underground or in cetrain extradimensional planes.