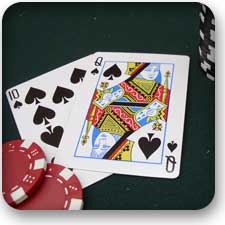 Aces - Also called Aces To The Center, Deuces To The Left, Fives To The Right. This fascinating dice game is very popular in the Far East particularly in Fudokan and its islands. In high stake games the players each possess their own lavish and extravagant cups bearing their names.

Players who have no dice left remain in the game because other dice may pass to them from the other players at any time.

Cheating - This game is almost impossible to cheat because dice such as shapes and loads would give the cheater no advantage because the dice pass from one player to another. On his own throw with the last die, a cheater might switch in a mis-spotted die that lacked an Ace so that he could not throw an Ace and lose. But, since the players on the left and right usually grab the die when a 2 or 5 is thrown, it would be almost impossible to switch it out again.