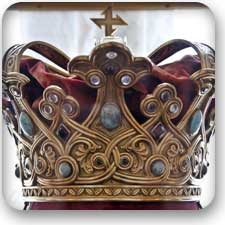 Laws of Eternus: The laws of Eternus are determined by the leader of each province who is most often a Duke or Duchess. They in turn choose representatives who lead the smaller townships and other areas.

Weapon Bonding: Weapon Bonding is a magical power that can be performed by the sheriff of a territory or his charges. It is a way to keep a weapon from being easily used while you are in a town.

Tax on Magic Spells and Items: Magic spells and items are heavily taxed and regulated by the local baronies.

Curfew Bell: The curfew bell is rung to signal the end of the working day.