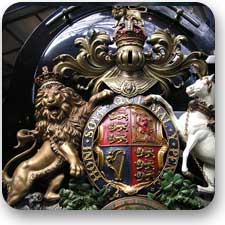 Royalty: Acknowledge royalty with a bow from the neck (not the waist) if you're a man and a small curtsy (placing your right foot behind your left heel and bending your knees slightly) if you're a woman.

Only shake their hand if they offer it to you first. If you are wearing gloves, do not remove them. Do not begin a conversation. Instead, wait until they start speaking to you.

Queens and kings are addressed as "Your Majesty." Introduce them as "Her Majesty the Queen"

Princes and princesses are referred to "Your Royal Highness." Introduce them as "His Royal Highness the Prince of Eternus." Any child or male line grandchild of a monarch is considered a prince or princess. The spouse of a prince is also a princess, although she is not always announced as "Princess". The spouse of a princess is not always a prince. Great-grandchildren in the male line of the monarch are not considered princes or princesses. Use the courtesy titles lord or lady for these personages.

Dukes and Duchesses are called "Your Grace" or "Duke/Duchess." Introduce the Duke to someone else as "His Grace the Duke of ," the duchess as "Her Grace the Duchess of Norfolk".

Baronets and knights, if male, are addressed as Sir (Name) and his wife is Lady (Name). You would introduce him using his full name, "Sir First Last". Dames is the equivalent of knighthood for women.

Other forms of nobility are generally addressed as Lord or Lady and introduced with their appropriate title.