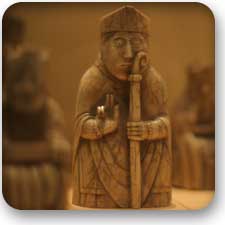 Vanguard: A complex game that incorporates real worl tactics and simulates war on up to five fronts at once. It is favored by elves and is at first glance similar to chess but it is played on five large boards connected by magical teleporting squares and with 100 different pieces each with unique abilities. A game that is very undermatched can last as short as one minute while a game played by true masters can take years or even decades. Tactics can be used to play this game.