The Tactics of Eternus 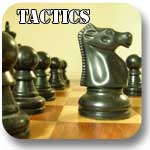 Tactics: Tactics are a very important part of Eternus and must be mastered to advance your character to the higher levels. We intentionally designed the game to make intelligent choices pay off and require the character to think in order to thrive. See also (Military Tactics)

Quick Tip: Training Tactic #1: Keep Moving: Place the enemy in a disadvantageous position through unpredictable and quick movements using terrain to your advantage and their disadvantage. When in doubt move on out.

Preparation: Know as much about your enemies as possible beforehand. Sometimes this is just not possible however and in those cases you must be particularly alert to weaknesses and strengths.

Personal Challenge #1: Memorize the armor types and their weaknesses for bonus ki points (+20 to attack)

Flying Creatures: Nets or entangling weapons can help even the odds a bit verses flying characters. Smoke or other methods of limiting vision can obscure their vision unless they have blind-fighting abilities. Of course they also hinder your ability to see as well. Getting back against a wall or other barrier if possible can help because not only do they protect you from flanking maneuvers but flying creatures must maintain forward momentum or they are forced to slow down to hover over a target and possibly even land. Barrier or wall spells that have enough range can be cast off the ground over your heads to force flying creatures to come under the wall to attack. Weapons with a long range can help in case they attack from a distance. Knocking a creature out is also very effective, forcing them to fall and take damage.

Swarms: Swarms are dense masses of tiny creatures that would not be particularly dangerous in small groups, but can be terrible foes when gathered in sufficient numbers. A party's first encounter with a swarm is often difficult, even deadly. They require different approaches and techniques from other monsters. Damaging a swarm is difficult requiring AOE attacks. An energy type or weapon can cause half damage to a swarm. In a pinch a lit lantern can be used as a thrown weapon, dealing fire damage in a similar manner. Flasks of acid or flammable liquids are also effective. Torches or lanterns are essential tools. As a general rule, if you cannot fight them effectively then get away from a swarm.

Terrain: Creating terrain is a great ability to have. Placing an enemy in difficult terrain lowers their defense making it easier to strike them. You should always be aware of terrain and watch out for terrain that can be exploited. Obscuring terrain for example is very useful. In addition to helping obscure an enemy's visibility on the battlefield it can help you to evade or hide. Some terrain can be cleared by others such as wind can clear a smoke bomb for example.

Cover: Using cover is one of the easiest ways to provides a place to hide and can vary in its usefulness depending on the particular type of cover and situation. Cover adds to the defense of a person but requires the use of a stance that requires you to be still so it limits movement. The best type of cover is grouped to allow for movement.

Low Ground: Low ground ground helps a character gain an advantage when fighting an enemy. Whenever possible in most situations it is advisable to seek high ground if it is available and place an enemy is a low position.

High AC: On occasion a party faces and enemy with a particularly high defense. In that case special tactics like terrain can help.

Knockdowns: A knockdown reduces a person's defense by 25 unless they have a bonus to prone fighting so a knockdown can help reduce and enemies defense considerable if it can be implemented.

Knockbacks: Attempting a knockback works best when your opponent has something to get pushed into or off of such as a cliff, a staircase or railing, into a fire, or off a building for example.

Disarming: In most cases, you're better off simply attacking an opponent directly instead of trying to remove whatever he has in his hand. However, there may be times in which denying your opponent access to an item has distinct advantages. To avoid being disarmed get a locking gauntlet.

Blinding: As a move action, a character can scoop up dirt, sand, or the like and then attempt to hit the enemy’s eyes. The character can do this only in the right sort of terrain unless he carries it with him. This tactic usually only works once during a single combat unless the enemy is of very low intelligence. Also some characters can create blinding terrain.

Manipulating the Battlefield: Movement gives you a dynamic easy way to manipulate a battlefield. Using your own movement is good but manipulating an opponent's movement as well is better.

Caltrops: Caltrops are a good way to discourage the use of an area particularly against those on horseback. Magical horses cannot cross them and will dissipate the moment they take damage and real horses will often stop in front of them to avoid injury.

Barrier Powers: These special powers provide temporary or permanent barriers. Whether they're virtually impenetrable or able to be broken, they are excellent defensive tools. You can use them to protect your party, and separate yourselves from enemies to give yourselves a respite for healing and preparation. You can place a wall in such a way that it splits the enemy force, enabling you to divide and conquer. Walls are incredibly useful and powerful tactical tools.

Concealment Powers: Concealment powers can help an enemy hide or move through to ambush an enemy.

Hit and Run: If you are weaker but faster than an opponent try to hit them and then run away creating chaos among the enemy.

Evasion: Know when to retreat. When you cannot win try to run away and live to fight another day.