The Lands of Eternus - Hibernia 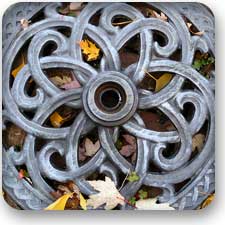 Hibernia - Hibernia which means "abundant land" in the Elvish tongue is an island that is part of the Kingdom of Eternus. It is a cold land inhabited mostly by extremely fierce Elven tribes, some of whom are reputed to live in castles made of solid ice and who take defense of their lands and its resources very seriously. Most of Hibernia is covered with ice and snow that never melts with beautiful and breathteaking mountain views, cascading waterfalls and a host of other delights. It is teeming with life and beauty around every corner.

High King Túathal - The High King of Hibernia was a Sidhe and was the son of High King Fiacha Finnfolaidh who was was overthrown and killed in a revolt by the King of Ulster. Túathal's mother, who was the daughter of the King of Alba, fled to the Southern Kingdoms with her son. 20 years later the son returned to Hibernia with an army, defeated his father's enemies in a series of battles and subdued the entire island. He became High King at Tara, in the center of Hibernia. There he convened a conference where he established laws called Fénechas. He annexed territory from each of the other four provinces to create the central province of Míde with a ceremonial capital at the Hill of Tara. Four fortresses were built, one for each of the four areas of land.

politics of Hibernia - Since the mysterious disappearance of the Sidhe there has been precious little conventional military and social order. There is no central authority and instead people rely on themselves and their kin.

Kinsman - Groups of kinsmen, usually but not always relatives, that are organized into large households for security and logistical reasons live together in large forts called households. A household would average around thrity kinsmen and family members and traditionally not be larger than one hundred members. The group is lead by a leader called a ruiri.

Trícha Cét - For disputes and other matters small communities organize into groups of one hundred households called a trícha cét which means "thirty hundreds" in the Sidhe language, Very few Trícha Cét are organized enough to elect an over-king traditionally called a rí cóicid since it requires a 80% confirming vote to elect and remove such a leader.

Tuatha - Four large groups of Tricha Cet have traditionally formed complex alliances called Tuath consisting of cooperating groups. They consisit of at least five but up to twelve tricha cet that form a loose political and economic alliance. Like the Tricha Cet few Tuath are organized enough to elect a king of over-kings called a rí ruirech. They form primarily to dispense justice across territories and to buy crafting goods and for other economic reasons. The four current Tuatha are Laighin, Ulaidh, Mumhain, and Connachta. The fifth Tuatha was the Tuatha of Meath that is now defunct but used to encompass all of Hibernia when the Sidhe ruled.

Laighin: This area in the East is the most affluent and cultured of Hibernia. It has a slightly larger population that the others incorporating 12 Tricha Cet. The main city is Blackpool. They have gotten rich from importing silk, wine and other fine goods from the Northern and Southern Kingdoms which have a deal to trade those items exclusively to the merchants of theis powerful Tuath. The men of the area are known to be noble in speech and their women are considered exceptionally beautiful even for Elven women.

Ulaidh: This remote and often dangerous area in the north is known to hold the most fierce warriors and expert fortifications experts in the land. Despite its difficulty in access the area has almost as many people as Laighin. It consists of 9 Tricha Cet. The main city is Carrickfergus. The castles of the area are left from the Sidhe rule and are built in the hillsides. The warriors in this area have been known to hold off invading enemies for decades with only a fraction fo their forces. The biggest lake in Eternus the Lough Neagh is located in the eastern part of the area.

Mumhain: This area in the south has about half of the population but is larger in size than Laighin. It is known for its beautiful and haunting music, its devotion to the arts and its schools of magic and mysticism. It also is known to have the most skilled horsemen and their associated crafting materials. The fairs of Munster are legendary and are sometimes attended by royalty from the other kingdoms and other traveling dignitaries. It is filled with many ancient castles and monasteries. The vast green countrysides are legendary for their beauty. It consists of 6 Tricha Cet. The main city is Cork.

Connachta: This rugged and remote area in the west has about a quarter of the population but is slightly larger in size than Laighin. It is ruled by the greatest and wisest druids and magicians. Its schools and training academies are excellent and offer an excellent value for those in need of a great deal of training. The area here was once the seat of justice for the Sidhe and the libraries are some of the best in all of the Kingdoms. People of the area are simple but at the same time eloquent and sophisticated. It consists of 5 Tricha Cet. The main city is Galway.

The Lost Tuath of Meath: A lost kingdom called Meath once ruled all of Hibernia and was made up of part of each of the four Tuatha. It was ruled from the Ivory Palace on the Hill of Tara which is called the seat of the King. The ancient earthwork of Tara is called Rath na Ríthe or Ringfort of the Kings. When the Sidhe disappeared the palace here vanished as well in front of thousands of stunned witnesses. Descriptions varied but most agree that it just seem to vanish within a blink of an eye.

The Four Tribes - The High King used to preside over the four Tuatha of Hibernia but each of these kingdoms also had their own regional tribal leaders that are subjects of the High King.

Oberon - There hasn't been an Oberon (High King) in Hibernia since the Sidhe and part of the capitol city disappeared seveal hundred years ago.

Fénechas - These laws are derived from the Sidhe and follow their tenants to the letter.

Religion - Most religion is local and as such local Abbots hold much of the power and wealth of the church. Since they are beholding to the community they can use their power and wealth to aid their communities directly. Monasteries are the most common type of religious center and they often act as cultural and economic centers as well.

Commerce - Hibernia is a hub of commerce and trades in animals, textiles, alcohol, metalworking, weapons, tools, jewellery, manuscripts, illumination, sculpture, and many other items. Artifacts like the Book of Kells, ornate Elven jewellery, and carved stone crosses that appear across the island are a reminder of the power of the crafters of Hibernia.

Invasions - Defending the lands from waves of Mortuus invaders and other attackers are a way of life in Hibernia, particularly in the costal areas.

Brehons Law - Hibernias rule of law is administered by a professional class of jurists known as the brehons.

Motto - The motto for Hibernia is "Pro Deo, Rege et Patria, Hibernia Unanimis". which means "For God, King and Fatherland, Hibernia is United".

Deadlands - In the southeast of of Hibernia the lands are full of ancient cemeteries and artifacts that are of unkonwn origins. It seems to center around the city of the dead known as Leinster, notably a fortified site on the promontory of Drumanagh, fifteen miles north of Blackpool, as well as Lambay Island although no expeditions to either area have ever returned. Strange coins, pendants, and brooches have been found in the area some of which are quite valuable to the right collector.