The Lands of Eternus - The Northern Kingdoms 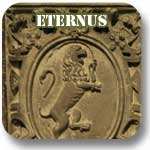 The north retains the original symbols of the kingdoms that flew before the king ruled. It was three overlapping golden lions on a banner of white surrounded by stars.

Note: The crest of the southern Kingdoms is a red-tailed hawk carrying the branch of a joshua tree. These symbols were once prophesied to bring the return of the lost king of Eternus.

York - This large city is the capital of the northlands.